When I wrote my post earlier this week, I wasn’t expecting to get as angry as I did. Not only did it get in the way of what I wanted to write about, but it frustrated me. I know it’s complicated to properly define mental health, but I didn’t think it was complicated because the dictionary doesn’t know how to define it. But we’re moving on…

A question that’s just as complicated to answer as ‘how do you define mental health’ is similar: what does mental health look like? I don’t mean yours specifically (though that IS the Mental Health Month Challenge!), but what the concept looks like. So I created a short photo essay to answer this question. 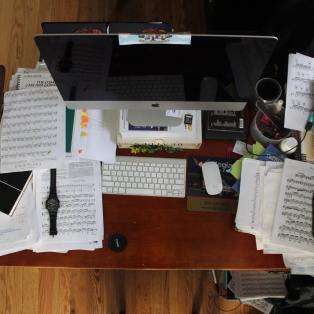 These four pictures show two specific setups, ones we’re all familiar with. If I told you to pick what mental health looks like, I would guess that a lot of people would pick the images on the left. A made bed, a nice desk, what’s not to love? It’s the encapsulation of #goals that we should all aspire to.

But what if I told you to pick images that reflect what your own mental health looks like? Not to speak for anyone, but I’d opt for the pictures on the right. And I don’t think I’d be alone. An unmade bed; a desk that looks like I’m in the middle of a massive project. So, which pictures are the most accurate? Breaking news, friends: it’s all of them.

Going back to the WHO definition from earlier this week, mental health is “a state of well-being in which an individual realizes his or her own abilities, can cope with the normal stresses of life, can work productively and is able to make a contribution to his or her community.” So let’s break that down using our pictures.

How do you cope with the stresses of life? Maybe it’s by making your bed in the morning because it eases anxiety. Maybe it’s by leaving your bed a little messy to teach yourself that not everything has to be perfect.

How do you work productively? With files where they’re supposed to be because a clear desk is a clear mind? Or do you have a million pieces of paper everywhere so that you know exactly where everything is, which helps you be more productive when you’re working?

If someone asked you what does physical health look like? you could talk to them for hours about all the different exercises a person could do, the diet someone has or the sleep they get. But the conclusion would be that the ways you can practice your physical health are almost limitless – as long as the end goal is to be healthy and productive. Why would mental health be any different?

Mental Health is Doing What Works for You

More articles about mental health are coming out now than ever before, as media networks interview mental health professionals about how to deal with mental health issues during a pandemic. Yes, it’s important to learn about your mental health. But it’s also important to know that, like every other form of wellness, mental health looks different for everyone. And if the goal is to be a healthy, productive person who impacts others in a positive way, do what you need to do to make that happen – even if it’s different from someone else.

Join 1,047 other subscribers
Follow My Brain's Not Broken on WordPress.com